Law Schools Should be Juice Bars 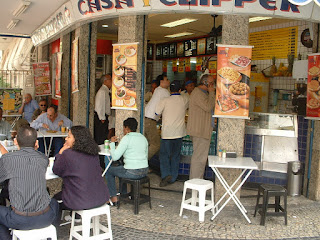 One of my favorite things in Rio is the juice bars. This photo is of my personal favorite. They are on virtually every corner. Most have not just juice but what I would call diner food. Actually, I am not sure I ever ate in a diner but it is what I imagine diner food to be. Some you stand at and some have seats with tables and then some have additional tables that you can pull up to park benches on the side walk.

You do not pick a juice bar on the basis of its name or the training of the cooks and juicers who work there. Performance is the only thing that counts; the better the juice, food and service, the more customers it has. As a customer, if you do not produce you get no juice, or anything else.

Law schools should operate more like juice bars.
Posted by Jeffrey Harrison at 10:38 PM No comments:

My one month stay in is almost over. After a month and some reading and many questions, I am no expert on Rio or . In some respects I feel like I know less because the complexities become more evident. What I can say is that in one month I met no one – professor, student, waiter, grocery store stocker, etc, -- with what in the States we call an “attitude.” (The law students were spectacularly well-prepared and serious about learning.) I also witnessed a number of signs of informal expectations of honesty. If you rent a beach chair you pay later. If you go to a club you pay the cover charge later. I bought an item from a beach vendor but did not have my wallet. He left the item and came back much later for payment.

This not to say there is no danger here. People are mugged, there is drug violence in the favelas and I was warned not to go in certain areas. Still, your average Brazilian seems kind, polite, humble, and honest with little interest in chiseling anyone. There was little yelling or speaking in cell phones at top volume while walking down the street. People form lines for elevators and buses.

I have heard Brazilians say they do not have race problem. On the other hand, slavery did not completely end here until the 1880s and close to 40%of the Africans taken into slavery and brought to the ended up in . (6% for the ) There were, in fact, no dark skinned people in the classes I taught. I suppose it could be a class issue rather than race but I think it must be both. What observed was integration of every color of skin except for the very darkest people. At a movie I saw the other night the preview was for a fair-skinned-upper-class-girl-falls-for darker-skinned-favela-dwelling-boy themed movie. So the race/class issue must be part of the culture.

What makes the race issue so complex is that is largely literally a nation of “people of color.” There are recent efforts to create quotas for “blacks” but what does it mean to be “black” in . At one university one identical twin was accepted as part of the quota while another was rejected.

Someone wrote or said something like “ is the country of the future . . . and always will be.” I hope he was only half right.

(Do not be misled by the photo of the dog my local beach. The most popular dog in Rio, as best, I can tell is the poodle. This is followed by the dachshund which goes to show that bad taste in dogs is international (As a former owner of a dachshund I am permitted to say this).

Posted by Jeffrey Harrison at 3:33 PM No comments: I am finishing a month of teaching in Rio. My first trip to Brazil. I am teaching 30-40 students law and economics in the day and going to as many soccer games as I can at night. The teaching is easier going than in the States since they have all taken a course in economics. The beaches in Rio are fascinating. If you like shopping and I do, you sit on your rented chair and the "stores" come to you -- food, including set up and cook on the spot, drink, clothes, jewelry, tattoos.

There other day one of Rio's small children who are sometimes alone on the beach was near me. He was not begging nor was he selling anything. He was thin but in a way that 8 year olds are. He was also shy. Finally, I asked one of the strolling vendors to ask the child his name. It was Pedro. We shook hands and Pedro continued to sit alone sometimes venturing into the rough seas and then hovering about. After a a couple of hours Pedro left. The last I saw him he was crossing the very busy six lanes of traffic that separates the beach from the hotels all along Rio's coast line.
Posted by Jeffrey Harrison at 3:29 PM No comments:

Some time ago over on moneylaw Jim Chen wrote yet another terrific blog Elitist Trappings to which I wrote an fairly innocuous comment. This was when there was at least officially still a race between Obama and Clinton and I observed that the candidate with the least elitist background overall (Obama but we are really splitting hairs here) seemed to come off as the most elitist. A comment on my comment questioned what I could mean by this. He or she wrote (who knows because people and law professors in general are such wimps that even when they say nothing controversial they say it anonymously):

"I'm not sure I understand Jeff's question. In what ways has Obama taken on "elitist mannerisms?" And, what exactly are "elitist mannerisms" in the first place? I would think that an overbearing sense of entitlement would be one of them, but Obama has exhibited that far less than McCain and even farther less than Clinton.

Unless you consider intelligence, eloquence, patience and a calm demeanor (not to mention graciousness and candor) to be "elitist mannerisms" and therefore a burden to him. I suppose in America, these are indeed burdens."

This is a good opportunity for me to explain what I mean by elitist mannerisms. (I note that the idea of "burdens' was not in my comment but in typical anonymous fashion this is once again the case of "hearing" something not said and making it an issue.) First, it is most definitely not, at least publicly, "an overbearing sense of entitlement." The whole sense of entitlement means not having to demand anything. You deserve whatever it is. In fact, one of the most important elitist traits is not showing emotion. If you show happiness, anger, disappointment, etc., it signals a weak spot and since for elitists life is one big negotiation you never show where you are vulnerable. Elitists always strive to appear to be patient, calm, and gracious. They let their workers do the dirty work.

All of those characteristics the anonymous writer values cut both ways. Sure it hard to say they are bad but they also mean you know nothing about the person. When I meet elitists I nearly always come away wondering what they care about -- what makes them happy, sad, angry. What do they really value? Is there any "there" there?

I am not sure the accompanying photo is supposed to be Obama for whom I will be voting. I just thought the caption was appropriate.
Posted by Jeffrey Harrison at 10:47 AM No comments:

Actually I have no particular view of the Kozinski matter in part because the facts seem to change hour to hour. The materials that he allegedly possessed, as described initially, sounded degrading and generally awful. Each time something is tracked down it seems that the descriptions may have been a bit misleading. It's not that I am a fan of Kozinski, far from it. In fact, my own view is that I have never heard of a law professor or judge so obviously focused on his image, trying to get attention, and wanting to be viewed as "out there." (Not that the need to seem to be unconventional is usual for law professors. My own theory on this, which could be dead wrong, is that after years of kissing butt, never saying anything controversial, never showing emotion, and always being close to the vest some just have to go crazy and so they grow a beard wear jeans or stop wearing a tie.) For Kozinski, who seems to try so hard, I suggest wearing a beanie with one of those little propellers on top. It would be so much easier and he would not appear to be trying so hard.

What interests me are the efforts by some to defend him (here and here). The second one by Lessig is embarrassing. Unfortunately it also is representative of what passes for sound reasoning when done by someone with the right credentials or teaching at the right law school. Faster than I think anyone can imagine institutional authority and self promotion seem to be elevated above fact finding and reasoning. It reminds me of one of my first articles. I got to a point in the article where I wanted to make a general statement like "In general courts are likely to . . ." The problem was that what I was saying seemed to require some empirical assessment and I was stumped. I mentioned it to a more seasoned law professor who looked at me and said "That is where you put the 'See e.g.' cite, list a couple of cases and you're good to go."

One of the commentators on the Lessig post captures it when he says it sounds like you (Lessig) knew what you wanted to conclude first and then essential made up a way to get there. Obviously not a law professor commentator because if he were he would know that that is legal research.

I am sure there are equally bad arguments condemning Kozinski but there is only so much of this you can read. Thus, I cannot put one of those "heres" here to send you to one of those.
Posted by Jeffrey Harrison at 10:43 PM 2 comments:

Favelas are the shanty towns throughout Brazil with Rio having perhaps the most well know. If you have seen Children of God you understand what a favela is. On the tourist maps of Rio there are huge areas simply labeled "favela." No streets are indicated. This would be like having a city map of a major US city and then having a poor section of town simply labeled "poor" and marked with a separated color without any other detail. The problem is that just using the term "poor" does not capture a favela. The "house" pictured here is only misleading because it does not fully portray the cramped condition.

While favela are simple "areas" on tourist maps they have evidently become tourist attractions. You can pay to go on a tour. Evidently you can buy trinkets and paintings and there is some benefit to the people. On the other hand, there may be something a bit off-putting about touring to view poverty and misery -- first stop Copacabana, second stop destitution. My sense is that the people running the tours are well motivated but I am torn. Maybe every visitor to Rio, before dropping $200 on a meal, should be required to tour a favela. On the other hand, if they become an attraction does it mean the misery of some becomes a source of enrichment for others?
Posted by Jeffrey Harrison at 10:07 AM 2 comments: