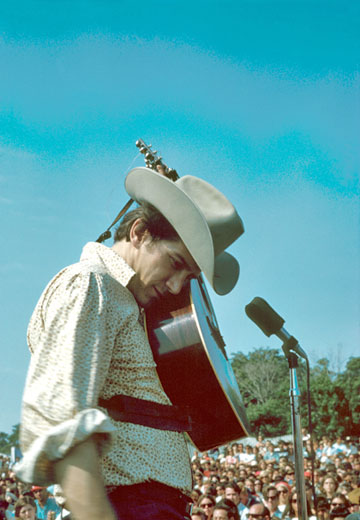 In a comment too rich to be relegated to a comment, Professor Eric Fink of Elon College, who has his own most excellent blog, reminds you -- not me because I never knew -- that Phil Ochs captured the notion of a liberal years ago with the observation that liberal means: "Ten degrees to the left of center in good times. Ten degrees to the right of center if it affects them personally." I'd say that pretty much captures most law professors and my description of events at my school in the post that is immediately below this one.

The frequent complaint is that there are very few conservative or libertarian professors or, put differently, too many liberals. There are too few conservatives and libertarians for most law faculties to be intellectual interesting but tenure sometimes solves that as closet doors open. Perhaps an even better case can be made that there are practically no law professors whose views represent the left. One indicator of having some leftist leanings is a willingness to talk about class but law professors rarely go there. As my friend once said, "Discussions of class are too close to the bone."

I think the appropriate term here is limousine liberal. I've thrown the term around not really knowing how it originated so I googled it. At least one view is that it originated with the 1969 mayoral race between Lidsay and Procaccino.

One of the more bizarre illustrations of limosine liberalism (a term that I now think is redundant) involves the purchase by supposedly greens of pollution rights. It's a crazy combination of the Coase Theorem and limousine liberalism. Feel guilty about driving your SUV, limo or flying the private jet? Just buy some carbon credits. No less pollution but someone else pollutes less so you can. Is this something like paying someone to take your place in the army? So, as I understand it, it's OK to pollute as long as you win the right in an auction. Guess who wins those auctions -- money counts, not need. Duh, doesn't it make more sense to buy them and not use them?
Posted by Jeffrey Harrison at 9:40 PM 1 comment:

Liberal For You; Conservative for Me: Public Law School Financing

Those who study regulated industries know that regulatory bodies are less concerned with how much a utility spends than with how much is passed through to rate payers. This "above the line/below the line" idea applies in many, but not all, respects to higher education. State legislators are less interested in how much is spent by a University than they are about how much of that cost is passed through to taxpayers.

What this means is that one solution to budget cuts is simply to decrease class sizes (less demand for state funding) and raise tuition (to maintain the status quo). For a University unit, like a law school, that has the principal goal of maintaining the status quo or even expanding while so many others cut back, it works out fine. Of course there must be an agreement that the tuition raising unit gets to keep the tuition hike so, as one administration puts it, "dollars generated are returned to the benefit of the college whose students paid those dollars" -- to say nothing of the faculty and the programs they favor. This sounds a great deal like the idea that law schools should do what benefits those who pay the bills. Yes, the stakeholder/fiduciary duty model appears but only in a limited way -- very little mention is of made of taxpayers who still pay most of the tab.

This is a highly popular strategy for the faculty-beneficiaries but raises a number of questions. If that is the approach one takes to higher education, it means shutting down or downsizing departments whose students do not generate sufficient revenue. Good-bye humanities; hello giant classes. (Now, we don't want that do we? On the other hand, someone else should pay, right?)It's a very conservative view and completely at odds with the idea that some units of the system should cross-subsidize other units or even that tax payers should subsidize anything. Here again the public utility analogy comes into play. Most of those opposed to cross subsidizing others in the University probably think it is a great idea for taxpayers to pay their salaries and, in the case of utilities, for example, for some rate payers to pay more to subsidize life line rates for poorer rate payers. It is the "liberal when it comes to your pocket book and conservative when it comes to mine" philosophy of the elitists who control higher education.

Of course there is a possible extension of this new conservatism and that is privatization. The new approach is one that embraces privatization as long as it is beneficial to law teachers. In short, there is no principle involved, just the idea that a bit of conservatism is not so bad as long it means preserving the ends -- us.
Posted by Jeffrey Harrison at 11:12 AM 1 comment:

Whose Gravy Train is This? Over on Moneylaw there is a terrific new post asking if the gravy train is over for law professors. I doubt it because so many law professors are blinded their sense of self importance and trained to be successful advocates especially when they are their own clients as so many are everyday.

In the Moneylaw post, my old Dean, Rick Matasar is quoted as saying, "We are an input-focused business, and outputs are what the students are paying for. . . . Law school needs to be about what people need -- not what we're good at. ... Most of us are social misfits, and we're the ones who've been designated to teach the students how to work interpersonal skills. . . .We should be ashamed of ourselves. We own our students' outcomes. We took them. We took their money. We live on their money to pay to come to San Diego. And if they don't have a good outcome in life, we're exploiting them."

His reference is to the latest law professor convention in San Diego and I think his comments need to be amended a bit for those of us teaching at public schools.

I agree with Rick on much of this but feel he has underestimated the problem. It is true that law professors focus on inputs --- how else can narcissistic hiring policies be explained. They also focus on outputs. The problem is that the chief output is law professor well-being. Thus, the students' money as well as that of other stakeholders is taken to advance the ends of law professors. How else explain the constant angling for low teaching loads, caps on class sizes, two-day a week teaching schedules and machine graded multiple choice exams?

Right now, even though applications may fall, the number of people who want to go to law school far out strips the number of seats available. As long as that holds true, the gravy train will continue even if it means admitting and graduating poorly qualified students who will fail the bar or fail their clients. The gravy train will only end -- and only then for the lowest ranked schools -- when demand falls so much that no amount of foraging for students will fill the seats. Only then will outputs become important because then the real output "professor well-being" will be threatened.
Posted by Jeffrey Harrison at 5:23 PM No comments:

From time to time a law professor at another school writes to me rather than comment on a post. Here is part of an email from what I assumed to be a first or second law professor. He or she had just come from an appointments meeting at which a number of candidates were discussed.

"I assumed that the hiring meeting would show me that people took the hiring process seriously. While this was certainly true of a number of people on my faculty (I suspect a majority), others really surprised me. Lessons that I learned from the faculty meeting (based on oral comments at the meeting rather than the vote itself):
1. scholarship matters except for when you like a person
2. the job talk matters except when you like a person
3. when you don't like a person, you say it indirectly ("something does not seem right about them" without explaining what it is)
4. scholarship matters except when you don't like the person
5. written faculty comments on the visit matter except for when they do not
6. we arbitrarily either count or discount practice experience based on how much we like the candidate."

Note that "like" a person plays a role in 5 of the 6 rules. I wonder how the rules might apply to selecting members of a football team.

Pretty crazy way to pick a football team right? The team would lose every game. Is there any reason to think the "like" factor is different for law faculty success. At least in football there will be an objective measure of success and an opportunity to cut players. In law school hiring there are no measures and the initial hiring decisions are for lifetime jobs.

What the young law professor described at his school sounds like a great approach if you are deciding who you want to go down to the bar with after school for a drink. It's a disaster for the stakeholders of a law school.
Posted by Jeffrey Harrison at 7:19 PM 3 comments: