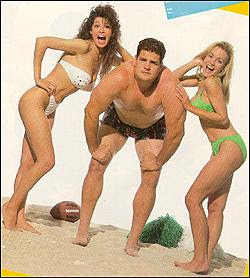 I'm a big sports fan. I even watch Mike and Mike with my sling box when away. Golic is beginning to wear on me, though. Recently I have following the Jim Calhoun "we bring in $12 million for the University" affair. This, as you know, is the explanation for and defense of his salary and that of every other big time college coach. The fact that their salaries are set by the market is OK by me although I think it is a pretty screwed up market that values a coach in the multiple millions and the a high school teacher at 30K.

What concerns me is the way the argument has morphed into some kind moral defense as in "he's really a good guy" and I do not mean Jim Calhoun only. Let's be real. The coaches make their dough on the backs of a captive labor market composed predominately of African Americans and poor people. I'll stay away from the details but you know them anyway. Through a very profitable cooperative effort with the NBA and the NFL, the Schools exercise tremendous monopsony power. So, the next time you hear that the salaries are OK because they are set by the market, remember that the same cannot be said of the employees -- the players. When these high paid coaches concede their part in this exploitation and argue forcefully for extending the benefits of the market to their player I'll find the defense more compelling.

When you think about it maybe they are not much different from many law professors. Law Schools charge ahead to hire new professors from the privileged classes know that the economic downturn may be felt predominately by the non elites at their Universities. Is there that much difference between these two forms of indifference to the condition of those at the bottom of the ladder?
Posted by Jeffrey Harrison at 11:21 AM No comments:

I am not sure I agree but here comes another indicator of how class differences are manifested and, to some extent perpetuated. In a recent article Michael Kraus and Dacner Keltner describe different body language tendencies that are correlated with class. Here is part of their summary (the link above is to a short article about the article, not the original)

"Informed by recent advances in person-perception research,
and theoretical analyses of resource dependence and power, we
examined how SES is signaled in a face-to-face interaction. Our
first prediction was supported. SES was reliably associated with
a set of nonverbal cues: Upper-SES individuals exhibited more
disengagement and less engagement during a get-acquainted
interaction than did lower-SES individuals. Our second prediction
was also supported. Naive observers reached consensus
and identified participants’ family income, maternal education,
and subjective SES with greater-than-chance accuracy, despite
being exposed only to participants’ behavior during the get acquainted
interactions. Finally, these naive observers based
their judgments of targets’ SES—and rightly so—on targets’
disengagement- and engagement-related nonverbal behavior.
This study is the first to reveal relations between SES and social
engagement, and it is the first to show that SES can be readily
‘‘thin sliced’’ by naive observers."

What this means is that upper social class people have learned to signal their elite status by seeming to be disengaged, even bored, by others. This is especially true when getting acquainted because relative status has yet to be established. The authors suggest that the difference in behavior is an indicator that one is of high enough status that no approval of others is necessary. I'd say this reflects what I have described before as playing it close to the vest and revealing no emotions. Smile and nod too much and someone may think you are from a lower class. Be stuffy, and you are golden!
Posted by Jeffrey Harrison at 12:43 PM 3 comments:

Several readers have asked if I am going to blog about the pending law suit against UF and the Law School that Paul Caron has publicized.

I really cannot. I have thankfully been out of the loop on virtually all of the details. This is a huge Law School and I doubt very seriously that one person's take would be accurate.
Posted by Jeffrey Harrison at 12:57 PM 2 comments:

A couple of years ago over on money law I wrote a blog on making nice and doing nothing -- a common trait of the elites. Now it occurs to me that it is a great example of capitalism only the capital is social.

Let me provide some background. In the higher education contexts in which I have participated, there is always a subtle form of extortion. People can disagree but they never show exactly how much something really matters because if he or she does that to the point of causing discomfort, there are sanctions ranging from being the subject of gossip to being discounted or socially ostracized completely. When this happens -- pushing hard enough to make someone uncomfortable -- social capital is used. Kiss enough butt or scratch enough backs and you and regain some of it.

Discomfort is the operative concept here. Make enough people uncomfortable and you use up all your capital. Also we are not talking about right, wrong, truth or beauty. Even pushing the most dead solid truth or good cause can lead to discomfort. Never use social capital and you are completely ineffective. Use it all up and you are equally ineffective. I know people at both ends of this continuum.

There is another continuum as well and this is defined by how you use the capital if you choose to use it at all. You can use it for yourself -- complain about a teaching assignment, fight for your favorite program or more travel money because, afterall, you are special and doing God's work -- or you can use it for others -- a change in law school policy in which self-interest is not involved.

Now we could take each person and put a point on this grid and the all four quadrants would have some points. Just for orientation sake, the bottom left quadrant would be little use/ but personal use when used. In this quadrant you find many law professors. I would say "most" but that would mean over 50% and I am not sure. But if you had to pick one quadrant and put $5.00 on it, that would be your best bet. They hoard social capital and spend it one themselves.

I think there is some sociological literature to the effect that this behavior is very common among the upper classes and it is critical for a someone trying to climb the ladder to stay solidly in that bottom left quadrant -- or at least appear to be.
Posted by Jeffrey Harrison at 12:21 PM No comments:

The term "class bias" like many others has an idea or theory behind it but is not really brought home until you see it in practice as I have over the last few months. In the midst of my University's huge budget cuts, the Law School has avoided any cuts at all. It has done this by raising tuition and cutting class size. Some faculty feel shame at the idea of eliminating 25% of the students while increasing the law school budget and faculty size while the rest of campus suffers. Some feel it is simply a way to up the US News ranking by lopping off the bottom of those admitted. I hope not but this will depend on admissions practices which have not revealed themselves yet.

Still the idea of fewer students and higher tuition is not unreasonable. Fewer students can mean lower class size and, since our tuition is very far below the average, raising it, while unfortunate for students, does mean that those who benefit from the Law School pay a bigger part of the cut. It also lowers the stress on taxpayers most of whom are less able to pay than the students and their parents.

So where is the class bias? While law faculties grant tenure to the children of privilege year after year without a serious inquiry into whether they deserve a live time job and continue to hire even more of the privileged, they ignore the plight of maintenance workers, secretaries and year to year contract people are on the chopping block.

To be fair, a few have volunteered to teach extra in order to decrease the need for new hiring under such extreme conditions. But, for the most part there are excuses -- how do we know where the money will go? It's important to grow the law school, etc. And there are leaders who want to be able to take credit for steering us through hard times. Those negatively affected by this tunnel-vision will be unheard from when the "credit taking" occurs.

And finally there is the tendency to become company men and this I cannot claim to be class based. To understand what I mean think of the last time you had any kind of complaint about a product or service and had to interact with a clerk who immediately became defensive on behalf of the company. So too with faculty. At some point the goal is not to do good but to protect the School or a program regardless of what it is doing. Having always been an outsider, I'll never understand the transformation to company man when the company has gone astray.

Consistent with my New Year's resolution to be too quick to judge, I've searched for a charitable interpretation of events but cannot come up with one. If there is one, I'd like to hear it. But that would violate another rule the privileged go by: To engage on an issue is to concede there may be two ways to look at it. So, do not engage.
Posted by Jeffrey Harrison at 4:08 PM 4 comments: