Getting What You Pay For

I think I have seen version of this story before but the condensed very was in the NYT yesterday. Its the basic grade inflation story -- from a 2.5 to over and 3.1 -- and as far as I know no one got smarter. The study reported on establishes that the inflation leaders have been private schools. And, it suggests pretty strongly that inflated grades may lead to the disproportionate number of public school graduates in desireable jobs. So, I guess you can, in part, buy your way to a good paying job which then means so will you children. I am not sure the cycle can be broken.

On a related matterm when I heard the story about sophisticated law firms interviewing people on the basis of their GPAs I scoffed. That is about as knuckleheaded as you can get. If a firm refuses to interview someone with a less than, say, a 3.2, do they not allow for the fact that at some some schools a 3.2 may mean average and at others it means spectacular performance. Yet, my big firm colleagues assure me that it is true. GPA trumps class rank and you could be at the top of you class and not get a call because you did not meet the GPA cut off. Seems crazy.
Posted by Jeffrey Harrison at 3:05 PM 1 comment:

Covenants not to Compete for Law Professors

Everyone reading this knows that most employment contracts are terminable at will. For the most part this favors employers who can fire someone for any reason or no reason. It is true that employees also can quit for any or no reason but the rule in practice benefits employers far more.

Have you heard of this rule? The contract is terminable at will by the employee but not by the employer. In fact, the employer cannot only terminate for cause but those causes are very narrowly defined. Pretty crazy, right? Maybe, but that is the contract that all tenured law professors have with their schools.

It gets stranger especially when you realize that public schools are spending the money of others. Say a school hires a new teacher. The teacher likely gets a reduced teaching load and summers off with pay in order to write and basically learn how to be a law teacher. If the new teacher prefers, new courses will be created. And, as a teacher becomes more senior he or she can insist on a new Center or a new L.L.M. program because that is more consistent with what strikes his or her fancy at the time. This drives hiring and other investments. These are all investments a School makes in a professor.

You might think of the professor as having gone through an apprenticeship program. Plus, and I know you will think this is petty, but it is not to law professors, the professor racks of tens of thousands of frequent flier miles at the School's expense which then are used for pleasure.

After all this investment the employee/professor can terminate at will and be off to a new school taking all the human capital the old school paid for and leaving the old school holding the bag as far as the courses and programs created to accommodate the newly departed. (There is one place were schools are unwilling to play the role of the dupe. In most instances a professor taking a sabbatical is required to come back for a limited period of time or pay up.)

Sounds like just the place for a covenant not to compete. You say "but law professors do not compete." Hogwash. If a chef moves to a new restaurant, does she compete with the old one? If you do not think there is competition, take a look at US News and World Report and the machinations schools go through to increase their rankings.

So why no covenants not to compete? Maybe they would not be enforceable. If so, why not contracts that bind professors to schools for some period of time with liquidated damages? Please don't say because the professors have all the leverage. For every law professor I think there are ten people at least who could be as effective who are rejected. And if hiring committees would get over their irrational obsession with Harvard and Yale the number would balloon as would the work ethic of those hired.

I'd like to say I know why Schools allow themselves to be robbed like this but I do not. I think what I have describe is true at both public and private schools so it cannot be the lack of accountability that comes for spending money in the public sector.
Posted by Jeffrey Harrison at 9:25 AM 4 comments:

One of the things I teach is law and economics and for 8 years I was a economics professor. The last three of those I went to law school and eventually landed a law teaching job because law and economics was an up and coming field. At that time, resistance to an economic approach was fairly strong. If you knew anything about economics the view was that you were likely to be a conservative and even then law teaching was not a profession that was as open to conservatives as it was to so-called liberals. This view still persists but it is not as knee jerk as it once was.
This all seemed odd to me because law professors were far more uptight and humorless than the economists I had worked with. And, if two professors were talking and one was wearing an expensive suit and carrying an expensive briefcase and driving a Mercedes, that was almost always the "liberal" law professor and the one in jeans was the economist. In short, the law professors seemed, and still do seem much more materialistic and greedy than the economists I know.
In fact a pattern seemed to emerge. Some people found law and economics offensive but lived their personal lives like maximizers of self interest. Things were negotiated down to the last nickel and the fewer number of courses and days taught the better. They were the law professors. Others taught economics or law and economics and did not live by efficiency standards at all. To me, at least, they seemed less obsessively self interested.
The law professor greed factor seems to have found a new manifestation. One, of course, is the double dipper. Retire at one school and collect your pension check and get a full time job at another. I am not talking here about the retired professor who teaches as and adjunct or part timer for a small fraction of his or her former income. I have always wonder why schools would pay double dippers as much as their other professors. Unless the double dipper is a star surely he or she would take a reduced salary. Even if the new job offers only a 50% salary, the double dipper is still making more than staying at his old job.
At my school we have the possibility of triple dipping. You can collect a check equal to a year's salary if you agree to resign at the end of the year. At that time you can collect retirement and also get another full salaried job. In fact, if there are few positions for new professors, it is in part because these schemes to get veterans to move on and make room have failed miserably.
I cannot say whether economists are as likely to double and triple dip at law professors but I am willing to bet they are no less greedy (and remember the law professors are already among the highest paid people at a university) than economists and if I really had to bet I would say more greedy. And, remember this is all in the context of people who claim not to wedded to the ideals of capitalism and materialism and for whom the phrase "rational self interest" is an anathema.
I suppose is this all just fine but sometimes I wonder if it goes too far. Suppose you are at a law school and have a sense of entitlement. You teach hardly any students, name your schedule and start a program that is your baby meaning that the school invests gobs of money to keep you happy. And then you get a chance to triple dip and you are gone to another school. I guess you are just a rational maximizer of self interest -- something many economists view as just an assumption.

Some of Adam Smith's views of higher education and professors are quite similar to those found over on Moneylaw and on this blog. All are found in the Wealth of Nations:

". . . [T]hey are likely to make a common cause, to be all very indulgent to one another, and every man to consent that is neighbor may neglect his duty, provided he himself is allowed to neglect his own."

"In the University of Oxford, the greater part of the public professors have, for these many years, given up altogether even the pretense of teaching."

"The discipline of colleges and universities is in general contrived, not for the benefit of the students, but for the interest, or more properly speaking, for the ease of the masters."

My goodness!
Posted by Jeffrey Harrison at 11:27 AM 1 comment:

I know this is not the usual topic of this blog but I spend a fair amount of time with my dog an cats. It's pretty clear to me that cats have no sense of humor, none at all. But they have a powerful sense of irony. 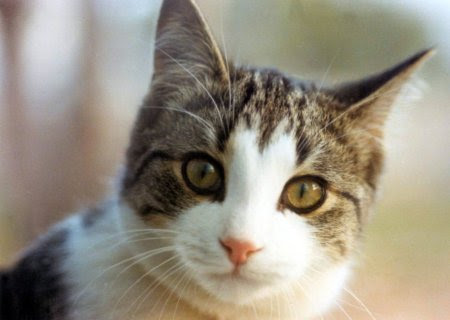 Watching the news about coal miners in West Virginia is hard. My grandfather arrived at Ellis Island from Italy as a 16 year old and went directly to West Virginia to mine coal until the day he died putting on his work boots. My dad and uncles all spent time in the mines before the family escaped to Massachusetts and eventually Florida. All lived their lives as working class people

Many of them have the same characteristics as the widows and relatives on the TV news -- overweight, poor teeth, weathered, bad grammar and poorly educated. You might find them at Walmart on Friday night. Why Friday night? If you have to ask stop reading and go back to your cushy life. Friday is payday for these folks and on that day they get groceries and buy other things they need.

So what's the point? A tragedy for a law professor is teaching on Friday or having to grade essay questions. The idea of teaching extra classes? You must be kidding! Maybe having a law review editor make an unwarranted change. Do I really think these things are tragedies that they regard as as on a par with the deaths of coal miners. Not really. On the other hand, do I think they regard their petty needs -- new office furniture, a new paint job in the office, getting a full year sabbatical, teaching anytime other than 11-2 M-W -- as comparable to a coal miner's need for dental work, a physical exam, special training for a "slow child?" Absolutely. In fact, if you applied economics to this this, I think law professors experience more disutility from their unmet petty needs and unmet expectations that many working class people feel a result of not having far more basic problems.

Too many law professors I know would not know justice if it bit them on the ass.
Posted by Jeffrey Harrison at 6:49 PM No comments: