I'd Do Anything for Rankings But I Won't Do That 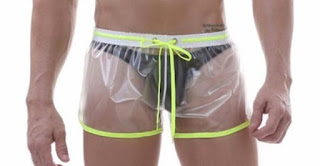 If you are a law professor, take a good look at these shorts and assume USNWR added a new category for ranking -- number of faculty wearing see through shorts.  If that happened, I  promise you that you would be encouraged to wear them. Of course, wearing them would not mean your law school is actually better -- no, but the ranking would be higher and that is infinitely more important than actually being better.

OK, the shorts example is (I hope) not realistic but if it happened wouldn't we all agree that the rankings had become a joke.  This begs the question. Aren't they already a joke? For example, take one of the recent ranking-increasing strategies -- lowering the size of the entering class. At my school the latest move was to lower the entering class from 400 to 300 to 180. And, get this. I am not kidding -- we regard it as a feather in our cap that the percentage of students accepted has gone down. Or to put it more accurately, we take pride in rejecting well-qualified applicants. Yes, we turn more students down not because it makes us a better school or that the public will be better served by fewer students. Naw, it's just to ratchet up our average LSAT scores and GPAs. At UF this is in the context of physical plant that was designed to serve 400 new students each year.

Think about it. Is a school training 200 students with LSATs averaging 158 somehow inferior to one with 100 students with an LSAT average of 159? By what possible definition is the first school worse than the second. In fact, rather than average LSAT why not rank schools based on the number of students times average LSAT score. (My apologies to utilitarians who see that I have adopted the utilitarian dilemma.)

It would be unfair to pick on my school. If you look at the selectivity rates recently published over on the tax prof blog my hunch is that UF is far from alone. This ploy of lowering the entering class is off set at many schools  by admitting transfer students whose scores do not count in the annual law school evaluations. And then there is counting people as faculty who were not previously faculty, rearranging finances so it appears that expenditures per student go up. (In fairness, I do not know whether my school does any of this.)

Schools go out in the market for students with high LSATs and GPAs and bid against each other to lure the students. The need of students is irrelevant, rich or poor, if you score high you get the dough. (I cannot prove it but I would bet high scores are correlated with higher socioeconomic class.)  Law students are the equivalent of college football players. They are really not wanted because of who they are-- character, experience, probability of doing good deeds upon graduation -- but because of how many games they can win. They are means to an end.

Law schools  now teach to the bar, offer courses on how to pass the bar, and activity discourage students who are at risk when taking the bar. No one knows how many are talked out of taking  the bar exam who would have passed had their confidence and self esteem not been undermined. All in the interest of boosting rankings. If it were for the benefit of the students schools would have done it decades ago.

But is there a limit? I have not seen one yet. I predict that by 2030 the rankings race will tighten as every law school had an enrollment of 1 student with perfect scores, faculty student ratios of 50 to 1, expenditures of 10 million dollars per student, and plastic shorts. There is a good outcome when the rankings are finally regarded as a joke. Maybe law schools will stop spending millions of dollars on personnel, publications, and whatever with the sole purpose of moving up a slot or two.
Posted by Jeffrey Harrison at 5:17 PM 3 comments: