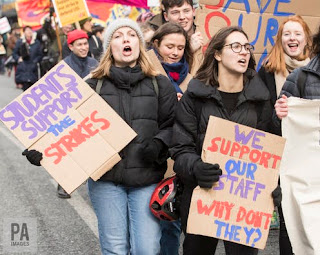 I've always had mixed feelings about the student demonstrations of the 1960s. The cause was a good one but I felt there was also way too much fun involved. Plus, it seemed to be an activity one could participate in only if you could afford it. Too many of my fellow impassioned demonstrations were also planning their family funded back packing trips to Europe. In short, there was definitely a bit of self-indulgence. And, of course, my personal interest in class-based justice was dropped as soon as the war wound down.

My one bit of something akin to civil disobedience since those days was refusing to teach on the day the state of Florida executed someone. I did this once and the only official reaction was my Dean telling me I should make up the day. So, I ended up inconveniencing a class of students and the execution took place and it was all bit foolish.

Over on Facebook on other places people alarmed about Trump (I personally have never felt stronger hatred for a politician except maybe Mitch McConnell)  make a comparison to nazi Germany looking for a way to head off this country's downward spiral. The question that arises is what can anyone do. I have a couple of suggestions. One is to stop legitimizing members of the Trump cult by being anything but civil to them. Do not buy anything from a Trump supporter. Is your doctor a Trump supporter? Get a new one. Is your grocery store manager a Trumps supporter? Go to a different grocery store. Economic boycotts can work if people will make the collective sacrifice.

Here is a touchier suggestion. I think everyone agrees that the vast majority of law professors are liberal leaning. I've always regarded them as limousine liberals because other than talking a good game I see little action. So, liberal law professors, do you want to do something that will show you care? Walk Out. Yes, I propose a day in which every Trump detractor cancel class for the day. Call in sick if necessary. Call it a strike if you like. That may be the most effective teaching you could do and it may give some support to the few souls who are actually willing to put something on the line to get rid of this monster.

Of course this will not happen because, when it comes to really questioning authority, we are a profession well-versed in free-riding.
Posted by Jeffrey Harrison at 5:33 PM 3 comments: