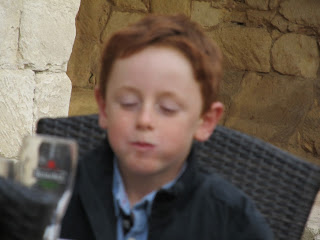 Last Sunday there was a terrific piece in the NYT about  one of the barriers poor but excellent students have with respect to attending  elite schools.  In a nutshell, they do not know how to do it or even what it means or what difference it would make. For many ":Harvard" is a fancy cheese and Columbia has something to do with the space program. Often,  my friends who claim to have had lower class roots talk about working their way through Princeton or Harvard. My thought is that they miss the meaning of class. It  is  not just money but it is environmental.  Even if you were poor, if you grew up in an environment in which Harvard, Yale, Princeton, etc., were names uttered in your house, you enjoyed far more of a head start than many others.

The article in the Times makes one mistake, I think, and could have added examples of class blindness. The mistake is the assumption that the elite schools would even like the diversity associated with working class students. Working class admissions  bring no glory to the limousine liberals who populate elite faculties. And, they could actually be conservative, go to church, eat meat, and own a gun.  The disinterest in working class people is probably driven by politics more than anything else.

Something that happened today reminded me of the class blindness matter. There are two aspects of it. First, the elitists who might want to have greater class diversity know virtually nothing about the things working class people have to deal with to go away to college -- family members that may need care, inability to go home at Christmas or any holiday, etc. The other one is more subtle. For example, today I mentioned the obvious class bias of unpaid externships. In my town most students sign one year leases. To enroll in an externship, most of which are out of town, they must pay double rent, not need to earn income in the summer, and be able to move. When I mention this the usual upper class response is "there is financial aid."  Do the elites not understand that financial is usually just a term for debt? And have they missed the fact that in today's market, paying that debt is close to impossible? I am quite tired of hearing  term "financial aid" used like it is some kind of economic equalizer. It's not but it is becoming the principal rationalization for ignoring the have nots.
Posted by Jeffrey Harrison at 7:13 PM 1 comment: 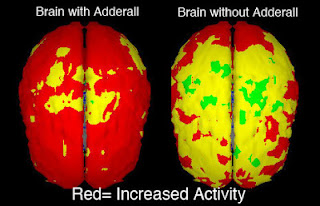 I see that Professor Campos is finished with his effort to expose the Law School Scam.  I read his blog once or twice but felt like I knew and agreed with most of what he was saying so I did not keep up.  Judging by some of his enemies, how wrong could he be?

Frankly, I am pretty much out of gas on my far more modest blog too. It has always had a goal that was a bit different than that of Professor Campos. Its goal was to reveal the persistent and destructive effects of institutions run by elites for their own ends.

Here is one more effort to explain the problem.  The people I know can be placed along a continuum. At one end are the "demanders." These are the folks who feel entitled to virtually everything and "demand" that their desires be met. Slipping along the continuum we come to the "askers." What ever they can think of, they ask for. At the far end are the people who do not demand or ask. If you know anything about relative deprivation, you know that to demand or ask you have to be in a context in which things are perceived as possible for people like you. For example, I remember a few years ago when two new faculty hires were told they would be given a certain sum for moving expenses. The reaction of one way, "What? They will actually pay for me to move. What a great surprise." The reaction of the other was "I cannot possible move for such a small amount." The important thing to note is that there is no correlation between need, merit, productivity, student welfare or institutional success and a person's position on that continuum.

In addition, administrators say yes to these requests and demands for a host of reasons other than student or institutional welfare. For example, an administrator may say yes just to avoid the harassment or to make sure he or she is not accused of 'insensitivity" to one political group or another. Or, the administrator may be concerned that the asker/demander is capable influencing others to believe he or she has been unreasonable. 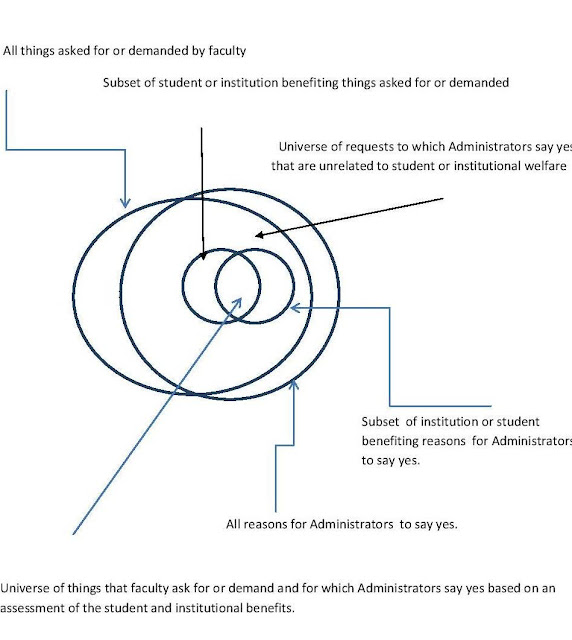 Posted by Jeffrey Harrison at 5:22 PM No comments: