Behavioral Economics: Why it is so Hard to Take a Hit on a 16

Everyone who plays blackjack knows you take a hit on a 16 if the dealer has a 7 or better showing. If  the dealer has a 6 or lower, you do not take a hit. It's strictly a matter of probabilities. With a 16 you are very likely going to lose and taking the hit lowers the probability only slightly. I think it is 3% less likely you will lose.

When you are at the table and the dealer shows a 7 and you have a 16 it is very hard emotionally to take the hit. Why? Probably because you are likely to lose no matter what but, if you take the hit, you have a sense of taking an active role in participating in your loss. If you do not take the hit, then you feel more passive. After all, you might think, I did not cause the loss.

Rationally you know that you should take the hit but what behavioral economics tells us is that people feel a greater sense of regret when they take an active step that turns out to be a mistake than when doing nothing turns out to be a mistake.  An example, is that someone feels worse if he or she buys a stock that goes down in value than if she or she declines to buy a stock that appreciates in value.

Casinos make a great deal of money on the irrationality of not taking the hit.
Posted by Jeffrey Harrison at 8:56 PM 2 comments:

Class on the Queen Mary 2 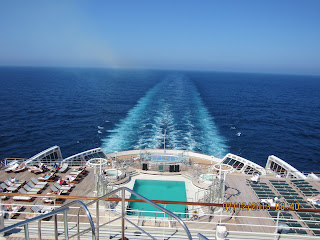 Yes, I did just cross the Atlantic on the QM2. It was my first boat ride. I am told it is called a crossing and not a cruise. A cruise is when you leave Miami, eat and drink yourself silly for a week or so on a very slow boat and then come back to Miami. On a crossing, I am told, you are on the boat for the purpose of going somewhere. I guess all international flights are crossings.

There is a definite class system on the boat. The more you pay the more square feet in your room, the higher your deck (all other things equal), the more private your dining and the larger your balcony. At the lowest prices you have no balcony or window and eat mostly buffet style. But, frankly there are no poor or working class people in any of the cabins unless they are like me -- did not know enough not to do well on standardized exams and through luck (good or bad, I do not know) ended up in a profession in which he would hate to be anything but a misfit.

The people who work on the boat are a different story. For whatever reason the waitstaff  tended to be Filipino. The workers in the gambling areas were generally Eastern European. I am not sure their contracts are all the same but for the restaurant workers you sign on for 9 months -- no days off. They start breakfast at about 6 AM and finish dinner about 10:30 PM.  The one I got to talk about it seriously said that there is really just time for sleep and you have a choice -- sleep or have some kind of life for an hour or two. After 9 months you take 2 to 3 months off without pay. He has being doing it for 10 years -- ten years of missing birthdays, weddings, holidays, etc. Some workers contact their families daily. He does not because it makes him sadder.

I would think the entertainers have a better deal at least as far is leisure time.

So, why aren't there days off when the boat is in port? I am not sure but it appears the goal for the QM2 is to rarely stop. The boat dropped us off in Southampton on a Saturday morning. Later that day it was off to Norway only to return the following Saturday. On the same day it was back to New York.

I asked why someone would choose this life, The answer was that it was better than anything else in terms of the future of his children. Plus, it was addictive. It allowed him to have a house and a car -- and, of course, payments due forever.

White House Down: For the Spare Room in Your Brain

To see a movie is to invite the writers, directors, and actors, into your most intimate place -- your brain. While there they may trash it or enrich it by leaving you with lasting insights, memories, and a better understanding of the world. "White House Down" falls into the second category. Mr. Jamie Foxx and Sir Channing Tatum, along with all those involved are perfect brain guests. You want to o...pen the refrigerator of your brain and say "there is some good cheese in the cheese compartment, just under the baloney" or "have some of that cold water that comes right out of the door." You want them in your brain's guest room for ever and ever. You may whimper but do not be ashamed. They are family.

White House Down is a civics lesson as well as a lesson about the power of Mr. Tatum's forearms, beady little eyes, and enormous eyebrows. Kudos to the makers of this masterwork for not bowing to the pressure to bring those mammoth caterpillars under control. Mr. Foxx's turn as someone acting like they are acting like the President is so real you think you are in the Oval office with him except that you know you aren't because you are sitting in the theater hoping the teeny tiny battery in your watch that makes it light up does not run out because you are checking the time every 30 seconds or so.

When the film ended my wife said "I think that is the worse movie I have ever seen." I've tried to tell her that sophisticated movie-goers say "film" or "cinema." I attempted to explain all the stuff about brains, and house guests and cheese but she is not ready for the gifts that White House Down so graciously gave to us.
Posted by Jeffrey Harrison at 1:29 PM 1 comment: