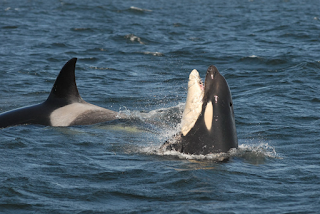 My law school, perhaps because it is relatively fortunate financially, has lunches for everything --speakers from inside, speakers from outside, faculty interviews, staff interviews, new babies, high school graduations, acceptance of articles, having had a good class, setting your personal best for beer pong, catching the biggest fish at the annual faculty fishoff, divorces, pet births, speakers at other schools, going up in the rankings, almost going up in the rankings, helping students in trouble but do not know it, surpassing 10,000 steps on your Fitbit. Trust me, this is a partial list and does not count the countless efforts to feed the students or the ubiquitous plastic trays and tops that contain the food much of which is uneaten.

But the main thing we do is choke orca. Yes we eat off of, drink from, and lift our food with plastic. So let's say 40 weeks of 2 lunches a week and 25 people eating. (These are conservative estimates.) I think that adds up to 2000 plastic plates s+ 2000 plastic forks + 2000 plastic spoons + 2000 plastic cups + 2000 plastic knives in just one year. If you are counting that is 10,000 chunks of plastic each year. And since this has gone on as long as I can remember -- let's say 5 years -- we have contributed 50,000 chucks of plastic to the environment that will biodegrade sometime after Trump finishes off the earth. So, I guess in a way it does not matter.

But it could matter! What if not only the Law School but the entire University and not just the University but all Universities decided no more single use plastics. When you get down to it there are climate deniers who say so expressly and there are climate deniers who say it by their actions. Looks like academics fall in the second category or maybe they just do not give a fuck. [And please no comments that I should try to initiate change. I have.]
Posted by Jeffrey Harrison at 10:52 PM No comments: 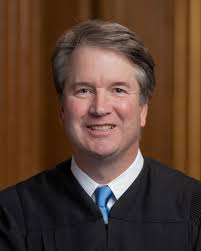 It will come soon if it has not happened already. Justice Kavanaugh will be the esteemed guest at many law schools. All will  be forgiven just as it has been with Justice Thomas. Most liberal law professors will crowd around at the inevitable faculty lounge brunch or afternoon coffee. I've seen how it work at my own law school which has had Justice Thomas in for two extended visits. With yet another to come. I am surprised we have not invited his wife to guest lecture.  I am sure if we could get Donald Trump in to teach negotiations or even ethics we would do it in a heartbeat. I would not let any of the three of them tie my shoe.

It is not just us and it's just not law schools. You might say that people put their convictions aside when a celebrity enters the room.  What is it with that? I can think of two explanations. The first is the "respect for the office." Total BS! It's more like being in awe of the office and being careful not to offend someone who is higher up on the status totem pole than you are. Anyone who kowtows to Kavanaugh or Thomas out of respect for the office misses the point that neither should be in the office.  Respect for the office would mean snubbing those two. If you really respect the office, do not toast the pretenders.

The other one -- which I have heard -- is "he is really a nice guy." Really, really! By that standard everyone is nice. How hard it is to seem to be friendly and impress people with superficial affectations of warmth. Oh, let's just have a beer together. (Or in Kavanaugh's case, make that a keg.) Being a nice guy, which anyone can do, is one way to hide your actual values. Being a nice guy should not be assessed on the basis of a 20 minute talk or a dinner but rather on what you actually do that affects people you do not now.  Thomas, Kavanaugh, and Trump are not nice guys no matter how "nice" they can be in a social setting.

But somehow, after the smoke clears, Kavanaugh will be the toast of many faculty gatherings attended by liberals and conservative alike. Because, we know when you get right down to it, he is a nice guy and we must have respect for the office.
Posted by Jeffrey Harrison at 5:35 PM 1 comment: